The Sgian Dubh is a key part of the overall kilt. I bet when you typed this item into Google, you were using some rather crazy spellings such as “Skee n Doo”, “Ski n Doo” or “Skiandoo”. The reason why sgian dubh is so hard to spell is because it is a Gaelic word, as opposed to an English word. With only 50,000 speakers of Scottish Gaelic, you can be forgiven for spelling it wrong!

What is a Sgian Dubh? 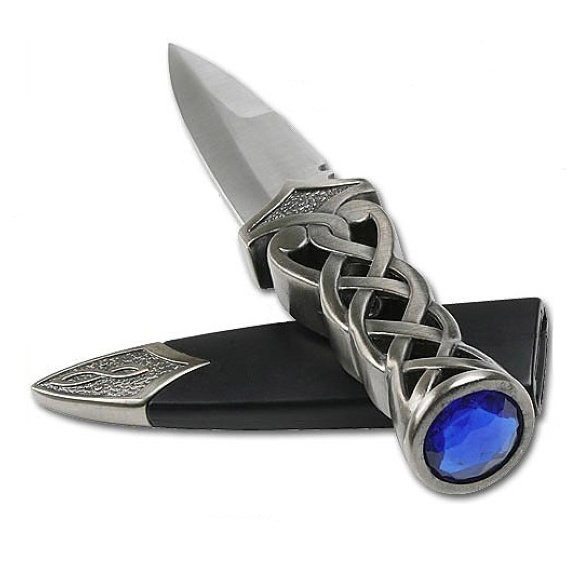 The Sgian Dubh is a small, single bladed knife that is inserted directly into the kilt sock of a kilt wearer. Originally, it was used as a knife for the preparation of meat, and other foodstuffs. Now, it is used as an ornamental piece as part of wearing a kilt to a formal event. When tucked into the kilt hose (sock), the upper handle area is visible, with the blade tucked in. 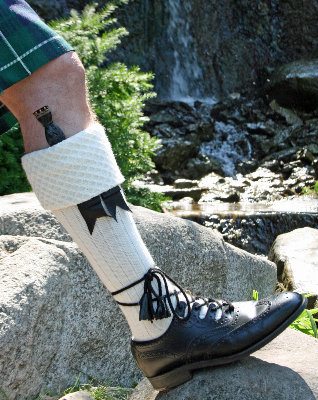 What are the Origins of the Sgian Dubh?

As mentioned above, the name is Gaelic. “Dubh” means black, and there is also a secondary meaning of “hidden”. This dates back to when weapons were to be left at the entrance to a building, some would keep this “hidden knife” in their kilt sock in case that any trouble flared.

The sgian dubh is believed to have evolved from the “sgian-achlais”. This was a small dagger that was stored under the armpit of the wearer. Yes, such a thing existed! These sgian-achlais were used in the 17-18th centuries.

The sgian dubh is said to be similar to a small skinning knife, that is conventionally seen as part of a set of hunting knives. Many of the earliest sgian dubhs that were produced had handles made of antler.

The early blades of the sgian dubh varied considerably in terms of construction. The “spear-point” tip has become the standard blade that is now used in all sgian dubhs. There are many examples of some of the first sgian dubhs which are currently on display in the National Museum of Scotland, in Edinburgh City Center, that are suprisingly made of steel formed in Germany or Scandinavia. This steel was highly sought after by many Scots during the 17th and 18th centuries. These blades tended to be around 3 inches long, and many more modern sgian dubhs are of this length.

With modern sgian dubhs which are worn for ceremonial purposes, the blades tend to be rather simple and not razor sharp. The blades tend to be constructed from stainless steel with the hilts (handles) sometimes made of plastic to resemble “antler” or other materials such as wood. Many high quality sgian dubhs have handles that are made of exotic materials such as ebony. Some even have silver integrated into their designs. There is no standard example of sgian dubh to go by, and it could be said that no item is the same, especially if they are custom made.

When not in use, the blade is held in a sheath (also called the scabbard). This tends to be made of high quality leather, and is sometimes made stronger by the presence of wood. Sometimes, there will be intricate engravings or carvings to make the scabbard more appealing. You can expect designs which tend to integrate the Scottish thistle, especially when worn with a Scottish Kilt, or Celtic knotwork, for Irish Kilts. High quality scabbards tend to be expensive, so if you are on a budget, try and select one with a plain design. While a nicely designed scabbard would look nice, it will be hidden when worn in the kilt sock, so it is not overly important. Aswell as Sgian Dubhs, make sure you take a look at other kilt accessories such as sporrans and kilt belts to complete your outfit.